San Diego, CA – January 11, 2018 – The National Association of Hispanic Real Estate Professionals® (NAHREP®) has published a report with its analysis of the "Tax Cuts and Jobs Act," which puts into place significant changes in the tax code set to go into effect for the 2018 tax year. NAHREP's analysis, found at www.nahrep.org/taxreform, includes an outline of the anticipated overall impact of tax reform and pays special attention to how the changes affect Hispanics in four key areas: the standard deduction, tax rate changes, itemized deductions, and special provisions, which will have a significant effect on Puerto Rico.

However, NAHREP expressed disappointment that the reduced income tax rates for middle class individuals are only temporary and that the changes to the itemized deduction rules negatively affect residents in states with high income and property taxes, such as California and New York. These more heavily taxed states also have among the highest proportions of Hispanic residents, which disproportionately impacts this segment of the U.S. population.

As a real estate and housing organization and the largest Hispanic business organization in the country, NAHREP plans to stay engaged as "clean up edits" are proposed to the legislation before it goes into effect at the end of the year. 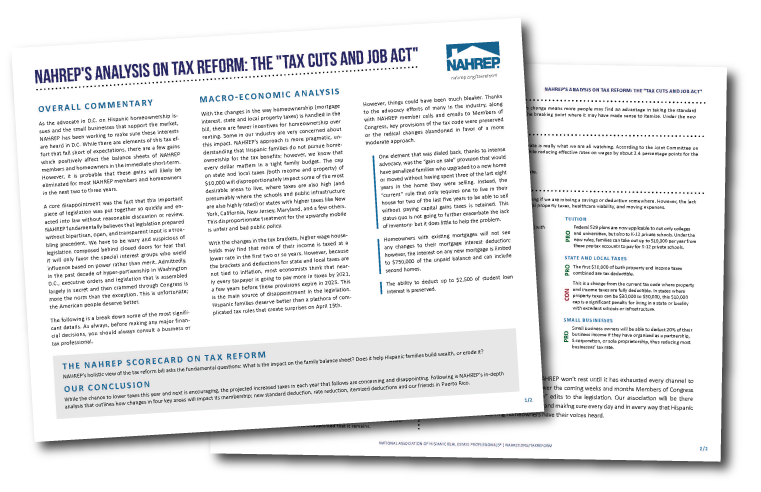